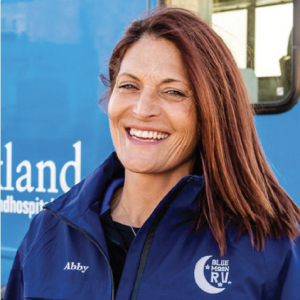 EDITOR’S NOTE: The following was written by Abby Simmons, the owner of and director of operations for Blue Moon RV in Carrollton, Texas. She has experience in operations management in challenging and changing environments while transforming business to perform at maximum efficiency and quality. She is also and avid RVer with her husband and company president, Rodney Simmons.

Lemons to lemonade – We believe it is what we do with the lemons that counts. We all usually notice when we have something negative drop in our lap, but I know I had to train myself to LOOK for the positives that came from that “negative”. Now it is a game I play.

So why is a regular American business owner opining about how she processes challenges? Introducing our 2017, 2018, 2019 and 2020 charity project – Carry the Load. Something I have mentioned about Blue Moon RV is we think big and believe in keeping our word no matter what. This project is something we sheer gritted our way through. While running a business, we have spent almost every weekend working on this project since February 2017. During this time, we had an astounding variety of challenges from physical injury to pandemic. While we are currently finishing up the final punch list for this complete custom renovated 2006 Cougar Laredo fifth-wheel, we thought it would be a good time to recap its story and the lessons it gave us.

In February 2017, as Blue Moon RV owners, we found themselves owning a repossessed 2006 Cougar Laredo. The whole process was a bureaucratic nightmare. It led both of us with a very bitter taste in our mouths. The energy surrounding it was negative to the point I was wanting to take a match to it. One day, I suggested to Rodney that we renovate the trailer and donate it in an exercise in turning a negative into a positive, (lemons to lemonade). Rodney agreed with one caveat – “this will teach you how much work goes into a project like this.”

Truer words have never been spoken. Yes, as the director of operations, I did get a taste of being an RV tech (on the simple stuff), but also working in close quarters with my husband and having to listen to him as the expert, and once again realizing for probably the 1000th time we cannot control all aspects of life.

Did we mention our goal was to complete it in one year? We made a great deal of progress in Year 1. We spent every weekend rain or shine at the shop gutting then repairing this RV.

Initially we did not have a charity to go with it. The goal was simple create something positive together. It was very cathartic and a great metaphor initially. Doing demolition, coming up with the design and seeing it start to manifest was very fulfilling.

Still, there were the setbacks. I admit I have about a 90% re-work rate when it comes to hands on technical work, but I am great at demolition. For example, I had the simple job of getting wallpaper paste. After finishing the wallpaper of the entire RV, I realized it was the wrong paste and we had to completely redo it. I was once again ready for gasoline and a match. Rodney just powered forward.

We realized one of our strengths as a couple was how we traded off when one of us would need a little extra help. In this same year we selected Carry the Load as the charity we would give it to when complete. They would hold a raffle to raise funds. Carry the Load is a 501(c) that has a massive national relay annually to focus on fallen military and first responders.

By the time we completed the job we estimate we have spent approximately 1,000 hours and easily five figures in parts. As of this writing, the trailer has been raffled and won by a nice salesman who stopped in our shop and ended up buying a ticket. He and his wife will be moving with their baby into this RV out of their current RV, providing them more space.

So, you may ask, why have we not yet finished? That is all part of the saga that is Carry the Load.

In 2019 we continued our weekend warrior project. We got to experience how the “little things” eat your lunch! We also learned anything custom takes 10 times longer, even for us. I learned how to do a roof recoat, install vent covers, switch out skylights, install vent fans and wire lighting. Yes, there was much cursing and gnashing of teeth. But we kept on trudging. That is, until Rodney tore his rotator cuff three weeks before the deadline in 2019.

This was a huge gut punch since the trailer was in the advanced stages of repair and most items had to be done by a technician. While Rodney tore what was ultimately his bicep and rotator cuff in May, he did not have surgery until July. During that time, he still worked with one arm. Obviously, it did slow our progress and, following his surgery there was a four-month rehab process.

We may have slowed, but we never stopped. We still attended the raffle and awarded to the winners, to whom we promised to deliver it upon completion.

As essential workers, we remained open. As a business that values its employees and had the ability, we only trimmed our hours. When the full slow-down hit in April, the lot was pretty empty, so we did the totally non-business-like thing to do: we started paying our staff to work on the Carry The Load and we opened up our VIP telephone support for free to all RVers.

Our approach was to do what we CAN DO. As tragic as the situation was in some ways, it afforded us four weeks of reduced work to put additional time into the project.

By April, we began to see a shift back up in our weekly appointments.We knew we had to hurry up and make hay while the sun shined and get this project done. The biggest part of the pressure this year was not only the pressure we put on ourselves but knowing someone was going to use it as a home and was eager to move in. We may have had one hell of a ride, but our goal will be realized and that is that we took a negative and turned it into a positive –a home for a family who needed it. The new owners are currently living in an RV full time and will enjoy more space and all the updates of this restored fifth-wheel.

or those of you who believe in manifesting your destiny, the owner told one person everyday he was going to win this trailer. He even put the drawing date on his calendar.

As of this writing we are facing another Memorial Day Weekend and we will be spending it at the shop, (we should bubble wrap ourselves and stay in a dark room until June 1), but Monday we will be spending time with our pack. The end of our seven-day work weeks is on the horizon. Make sure to check back in to hear how our contest winners are enjoying their new home.

About Carry the Load

The mission of Carry the Load is to provide an active way to honor and remember our nation’s heroes by connecting Americans to the sacrifices made by military, veterans, first responders and their families. It was founded in 2011 by U.S. Navy SEAL veterans, and in 2012 they launched a National Relay, consisting of an East Coast Route from West Point to Dallas. In 2017 the route covered more than 19 states, and in 2019 a Midwest Route from Minneapolis to Dallas was added. More than $25 million has been raised since 2011, and 93.35% of every dollar goes toward the program.