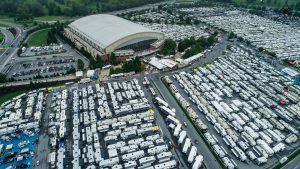 An aerial view of a previous Hershey Show.

For the first time in 53 years, the show won’t go on in Hershey.

In the end, COVID-19 posed too many challenges for the Pennsylvania Recreation Vehicle and Camping Association (PRVCA) as its board of directors decided Thursday evening (June 25) to scrap the 2020 “Hershey Show.”

Billed as “America’s Largest RV Show” and covering a million square feet, the Hershey Show annually draws consumers from across North America. This year’s show was scheduled for Sept. 16-20 at the Giant Center in Hershey, Pa.

“Obviously, it was a very difficult decision for the board to make,” Heather Leach, PRVCA executive director, told RVBUSINESS.com.

She said for the last two weeks the board – composed of 19 members from companies across the RV industry – had been gathering feedback from manufacturers, booth vendors and others. The board also reached out to the venue to determine the kinds of restrictions that would have to be put in place.

Feedback received from manufacturers and vendors about concerns for their staffs, coupled with the added expense of dealing with all of the restrictions that would have to be enacted were considerable impediments to going forward with the show, Leach said.

But health and safety, she added, were the main drivers of the decision.

“At the end of the day, it comes down to we want to keep all of our exhibitors and our staff healthy and that’s our first priority, so we thought it was the best decision to cancel this year,” Leach said. “It was not an easy decision by any means, but we really pride ourselves in putting on a quality show that customers and exhibitors enjoy and benefit from. And the way everything was falling this year, we just weren’t going to be able to put on that same kind of event.”

She said the PRVCA is looking forward to next year, “when we can put on the best show ever.”

On June 2, Marcus Lemonis, chairman and CEO of Camping World, publicly announced his companies – Camping World, Gander RV and Good Sam – would not be participating as exhibitors in the Hershey Show, citing COVID-19 concerns.

Leach said other manufacturers and vendors also had reached out, opting not to attend the show, while others voiced a commitment to attend no matter what. Still others said they would participate, but would limit the number of people attending out of concern for their staffs.

“I’m going to say it was about a 50-50 draw of those who were not concerned compared to the other 50% who definitely had concerns, which is understandable. But, you know, right now, RV sales are strong. Our dealers are extremely busy,” Leach pointed out, adding that she’s confident the industry will have adequate business to get past the COVID-19 crisis in good shape. “Every dealer I talk to is swamped right now, and that’s a good thing,” she said.

Leach said PRVCA staff would be reaching out to vendors regarding deposits that already had been paid for the show. “Thank you for your patience and support as we navigate this unprecedented situation,” she said